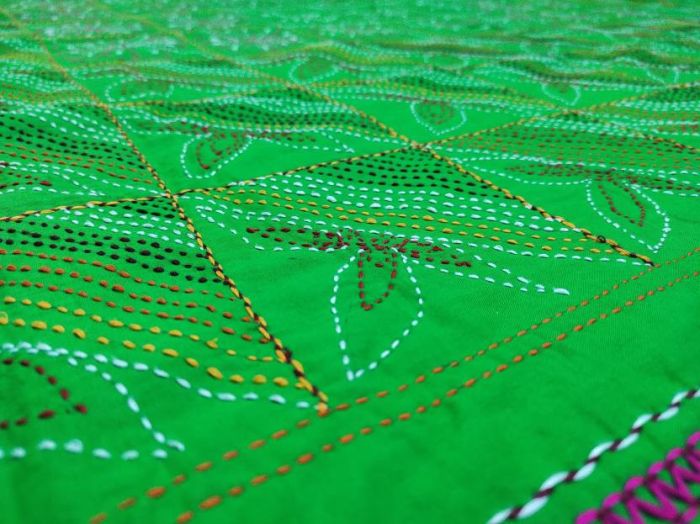 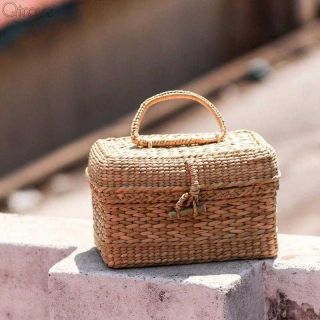 Add to Wish List Add to Compare
Eco Friendly Kauna Reed Vanity Box
Special Price ₹699.00 Regular Price ₹895.00
Add to Wish List Add to Compare
More Information
Details
About This Art
Traditional designs along with a contemporary touch is used to stich Amrapari’s khetas {Cotton quilt]. These are century old designs and were used by women using old cotton clothes and once made, it was used solely for the family members or gift items for close relations or simply used as a decorative piece.  Kheta making was not a full time job and sometime it took months for women to make one. The thickness of khetas would depend on the need and factors like climate, availability of materials and economic status of the person. Smaller khetas were used as gift items for newborn babies and highly designed khetas with floral motifs were gifted during weddings. A table runner like kheta called ‘Dastarkhana’ was considered extremely essential to serve food to guests. Kheta making was considered a part of ‘responsibility’ of women and was not commercialized for a long time.
Traditionally khetas were considered a dignified skill for women who would stich during their leisure times and varieties of design, patchwork and motifs were innovated. Threads of number of colors were used aesthetically. In earlier days, women used to wear sarees with well-defined border designs called ‘Pari’. Cotton yarns from the pari were meticulously taken out, rolled and reused as thread to stich khetas. Sometimes additional threads were used to give shape odd, even, ‘pipra’ etc stitch designs. Durability of a kheta depended on the density of stiches. More stiches means more durability as well as warmth in rainy days and winter. Some of the popular designs are running stitch, Back stitch, steam stitch, Fly stitch, chain stitch, feather stitch, French knot stitch, Satin stitch, blanket stitch, Cross stitch, Cretan stitch, Straight stitch, weaving stitch, Fishbone stitch, Chevron stitch, buttonhole stitch etc. Stiches are not drawn on the clothes. Instead a outline is made using the needle and thread and then the shapes are made. Women would innovate new patterns to impress family members and peers.
Reviews
0
Rating:
0% of 100
Reviews
Write Your Own Review
Exchange and Refund
All Categories